The communications unit is a piece of equipment seen and obtained in Turok. It is first mentioned in "Reunions," where it is then the centerpiece of Joseph Turok's objective until "Killing Fields," where it is returned to Whiskey Company.

In appearance, the comm unit is box-like and features multiple buttons and jacks, which, according to concept art, makes it appear as the "central hub" of a communications system, implying that it was part of a larger system which resided in Whiskey Company's ship before its subsequent crash and destruction.

On the right side of the unit, there is a large port and multiple little chips, which add artistic flare to the piece of equipment. On the left side, there are six buttons running down the left side of the machine, along with three dials.

It seems to have a long range, as it was heavily implied to be used as a long-range distress beacon for Whiskey Company. 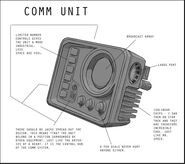 Retrieved from "https://turok.fandom.com/wiki/Communications_unit?oldid=81077"
Community content is available under CC-BY-SA unless otherwise noted.