Israel Crockett, known by his alias "Longhunter," is a character who appears in the Valiant Comics series Turok: Dinosaur Hunter. He is a hunter that frequently clashes with Turok, even going so far as to follow him into the Lost Land. He is inspiration behind the boss of Level 3, "The Ancient City," of the video game Turok: Dinosaur Hunter, who is also named Longhunter. 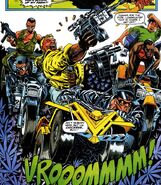 Add a photo to this gallery
Retrieved from "https://turok.fandom.com/wiki/Israel_Crockett?oldid=84032"
Community content is available under CC-BY-SA unless otherwise noted.