A terraformed planet, also referred to as a backwater planet, serves as the primary setting of Turok and Turok 2. The planet was in the process of being terraformed by the Mendel-Gruman Corporation, which resulted in the mysterious appearance of dinosaurs.

Mendel-Gruman used the planet's flora and fauna to further their research in biological weapons that they could then sell to various clients. The MG Soldiers on the planet were commanded by Roland Kane, before his death.

Before the events of Turok, the planet was under the process of being terraformed. Not much is known about the processes involved, but the project resulted in the sudden presence of dinosaurs on the planet's surface.

At an unknown date after the planet's terraforming, Whiskey Company arrived at the planet in pursue of Roland Kane, leader of the legendary Wolf Pack. This acts as the backdrop for much of the game's story, with most of the game featuring the planet's lush jungle environments.

During Turok, brief bits of exposition reveal that the planet's terraformation resulted in an exponential increase in evolutionary activity, which is the cause of the existence of the planet's dinosaurs, on top of other natural anomalies.

After the events of Turok, the planet would have been seen again in the game's sequel. The planet's apparent increased evolutionary activity would have sprouted new creatures, such as an amphibious Utahraptor, which had a radically altered design in comparison to their solely land-based relatives. New environments would have also been visited by the player, such as a large, sprawling desert and a deep swampland.

The terraformed planet appears to look much like Earth from orbit, with large green continents and massive, shining blue seas. It is a relatively large planet with at least two natural satellites (moons).

The map "An Invasion" gives a small peek into what the planet looked like in a pre-terraformed state. It was shown to be very unstable, desolate, and the land was dominated by seismic and volcanic activity, with exposed lava being present right underneath most of the planet's surface. An MG facility was established in one of these areas.

The surface features multiple biomes, and a plentiful variety of flora and fauna. The most notable biome is that of a tropical rain forest. This overtakes much of the planet's surface area and is the most common area that the player will travel through during the events of the game.

It features a large array of plant life, such as larger-than-life trees and tall canopies. The environment also tends to be rocky and mountainous, with formations ranging from small hills to large jagged peaks, casting long shadows over the environment. The mountains of the region are characteristically jagged and imposing as well, with large strings of mountain ranges being present in multiple areas on the planet.

Creatures residing in these areas range from the common, but deadly, Utahraptor to the fearsome and stealthy Lurkers. Going deeper into the rain forests reveals larger and more dangerous creatures, such as the Dilophosaurus and the formidable, but familiar, Tyrannosaurus rex, alongside the latter's offspring. Other creatures included the giant Brachiosaurus, along with the peaceful and timid Parasaurolophus and the massive predator Giganotosaurus.

Concept art of the now-cancelled Turok 2 also revealed that there were multiple variations of Tyrannosaurus rex and Utahraptor present in this environment. Differences ranged from simple color alterations in the feathers of the Utahraptor to physical changes, such as a spine-based sail in the case of a certain species of jungle Tyrannosaurus rex. Other creatures that would have being included Styracosaurus and black furred Smilodon.

Juvenile Tyrannosaurus rex
Add a photo to this gallery 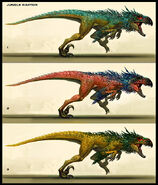 A Tyrannosaurus rex featuring a "sail," akin to a Spinosaurus.

Another Tyrannosaurus, featuring a much more traditional design.
Add a photo to this gallery

An additional biome present on the planet is that of a desert. Unlike the tropical rain forest, desert regions are very limited on the planet and were not seen on the surface from orbit, nor on the planet's render in Turok's in-game files. This environment was planned to be explored in depth in Turok 2 and was not touched on during the events of Turok.

This biome is host to more hostile and rugged variations of its jungle fauna counterparts, while the flora of the region is very limited in terms of presence, with many dead trees being present in media depicting the region. In addition, the area seems to have collected the remnants of many deceased species, as seen in concept art of the location.

As stated before, the desert biome hosts variations of previously mentioned species. Utahraptors and Tyrannosaurus rexes now feature hard, rock-like scales, which can deflect high-powered ammunition with ease. Past this, however, they remain aesthetically similar to their jungle relatives, with no noticeable changes in biological design. The desert biome would also had a variety of Triceratops that with spikes on its frill and like the Utahraptors and Tyrannosauruses had rock-like scales.

Desert Tyrannosaurus rex
Add a photo to this gallery

The third major biome depicted on the planet is comprised of wetlands. As the name suggests, the area is completely saturated with water, with large swamps, bogs, and marshes being depicted in concept art. This environment, much like the desert biome, was planned to be explored in depth in Turok 2 and was not explored during the events of Turok.

This biome is also host to newer variations of creatures. However, unlike the desert, which contained creatures adapted to a rougher lifestyle, the wetlands featured creatures based around their damp environments and, thus, a lifestyle suited to traversing the water.

Notably, the Utahraptors present in this biome feature gills; slicker, smoother skin; and basic fins located on the spine, running all the way down to the creature's tail. In addition, the creature's eye bears more similarities to that of a modern day crocodile, rather than that of a dinosaur.

A Tyrannosaurus from this biome was also present in concept art for Turok 2. Unlike the Utahraptor, which had multiple biological alterations based on its environment, the most notable difference between this T. rex and its variants from previous biomes lay in the creature's overall size and bulk. These traits rivaled even that of Mama Scarface, who was the largest T. rex and terrestrial carnivore on the planet, up until her death at the conclusion of Turok.

It was also confirmed that the wetlands would have being the of the Savage People.

Swamp Tyrannosaurus rex
Add a photo to this gallery

To top off the known biomes, there are polar regions on the planet, obviously contained to the planet's poles. As of now, it is unknown as to what flora and fauna are present, if any are at all.

Finally, while not a biome, the planet also has an array of subterranean cave systems underneath its surface. These range from large open caverns to cramped corridors barely large enough for people to crawl through. In some cases, these are home to certain species of dinosaurs specifically adapted to living in dark conditions underground. In other cases, these caves are home to large scorpion-like creatures known as Soldier Bugs, or, in extreme cases, large, uncatalogued, eel-like beasts.

Retrieved from "https://turok.fandom.com/wiki/Terraformed_planet?oldid=84142"
Community content is available under CC-BY-SA unless otherwise noted.