Turok Wiki
Register
Don't have an account?
Sign In
Advertisement
in: Acclaim, Bit Managers, Games, Turok: Battle of the Bionosaurs

Turok: Battle of the Bionosaurs

Turok: Battle of the Bionosaurs

Despite its name, the game is a Game Boy adaptation of Turok: Dinosaur Hunter. The soundtrack was composed by Alberto Jose González, the founder of Bit Managers.

The plot remains the same as Turok: Dinosaur Hunter. Turok must stop the evil Campaigner from acquiring the eight pieces of the Chronoscepter and using its space-time rending properties to conquer the known universe.

This game played out as a side scrolling shooter, allowing the player to grab various weapons to fight the enemies thrown at them.

There was little reception given for the game. 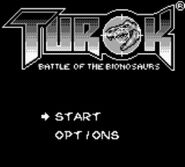 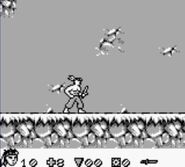 A screenshot of in-game footage.

Community content is available under CC-BY-SA unless otherwise noted.