Turok is a 2D side-scrolling shooter video game developed by Propaganda Games and published by Living Mobile, a subsidiary of Disney Interactive. A mobile port of 2008's Turok, the game was released alongside its parent title on February 4, 2008.

Not much is known about the game since it is no longer available for purchase. What can be gathered is that the game had 10 levels with customizable weapons.

The plot is the same as the console version. The game was released February 4, 2008. An update had allowed players to go to a site and upload their high scores, participate in various competitions, and find out tips and tricks.

IGN's Gerge Roush gave it a 4.5 out of 10, calling it "a very average action platform game plagued by some problematic mechanics."[1] 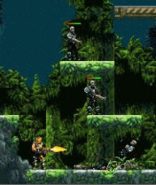 The player fighting in a jungle setting.

A screenshot of the final levels with dinosaurs.
Add a photo to this gallery

Retrieved from "https://turok.fandom.com/wiki/Turok_(2008)_(mobile)?oldid=73947"
Community content is available under CC-BY-SA unless otherwise noted.